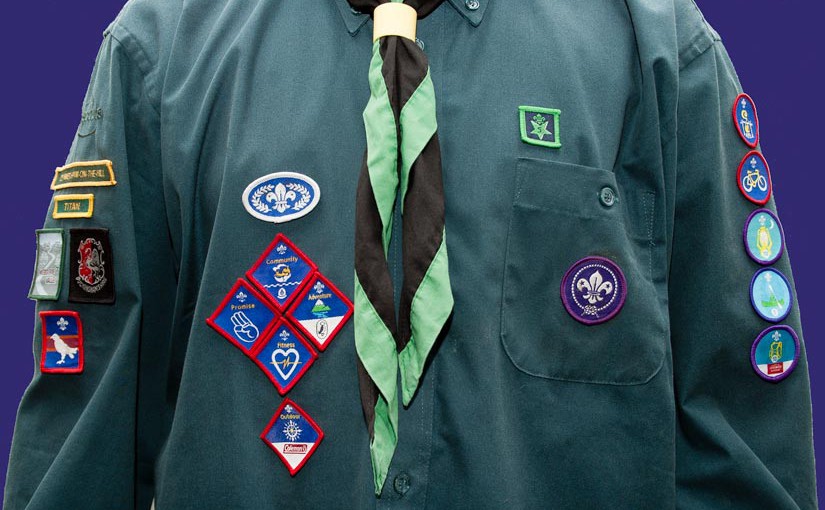 Where do you sew badges on a scout uniform? Scouts earn lots of badges but it isn’t always obvious where to sew them. The guide below will help you. The 2nd Amersham on the Hill scarf is black with a green edge. It is secured with a “woggle”, which is usually a leather band but can be made of any material.

You must provide a uniform, scarf and woggle for your scout. Your scout receives their badges when they are invested. To the left of the scarf is the purple Membership Badge worn by all Scouts worldwide.

Above the Membership Badge, sew the small square badges that denote how long the scout has been in the Scout Movement (including their time as a Cub and a Beaver). To the right of the scarf are diamond Challenge Badges. Scouts earn Challenge Badges during troop meetings as they work towards their Gold Award, which is the highest award a Scout can earn. If the scout earnt their Silver Award at Cubs, sew it above the Challenge Badges.

If the scout attends an international event, they sew a union flag above the challenge badges. The “troop” badge varies depending on the troop the scout is in; “Titan”, “Thor” or “Woden”. The other badges are the same for all scouts at 2nd Amersham on the Hill.

Sew these badges below the “Scouts” logo, in the arrangement shown in the picture. Activity badges go on the left arm. These are circular badges that the scout earns during activities at troop meetings.

Sew the Activity Badges in two columns if necessary.